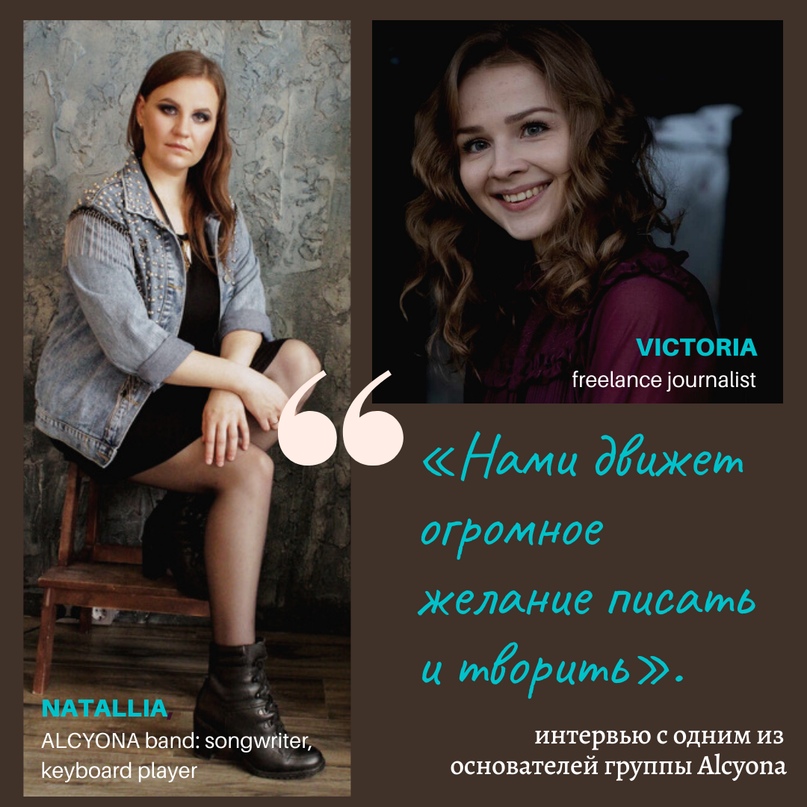 For many of us, the desire to create something still remains a desire. There are different reasons for this: lack of time, lack of persistent efforts and self-confidence.

This material contains the history of the metal band Alcyona which appeared because its creators wanted and did everything possible for this on weekends, after work or school.

Please welcome, who does not know yet, one of Alcyona’s co-founders – Natallia.

– Natasha, when did Alcyona appear?

– We have two important dates: 2012 and 2017 years. We consider August 2017 as the starting point in the band’s biography. It was time when Alcyona first performed. And November 2012 when I posted an announcement about searching for musicians on the popular Belarusian forum guitar.by.

My sister Daria sang from school and I offered her to become the vocalist of the band. Then Evgeniy who is know now as a Alcyona’s bass player answered the announcement. He supported my idea, especially he liked the fact that there were a lot of work ahead. So the three of us started to work together on songs. It took us five years to make the concept of the band, to determine the direction and how we want to see Alcyona.

– I am wondering why the band got this name?

– Alcyona is a star in the constellation Taurus, the brightest in the Pleiades open cluster. Stars and cosmos as a whole are a symbol of the mysterious and unknown. This is science fiction and imagination, the beauty of our world … I wanted all this spacious meaning to be in the name of the band and in our songs. Therefore it enables our audience to go with us on a musical adventure and immerse themselves in stories.

– If I am not mistaken, you are not only the keyboardist of Alcyona but also the author of lyrics and music, right?

– Yes that’s right. I like to be fully involved in the process: from creation to implementation. I became the mastermind to create a band and write songs. However, without the musicians we have worked within these years, we wouldn’t have what Alcyona has now. So I want to say thanks to everyone who was with us and continues to contribute to the band.

– How was your musical life before Alcyona?

– Before that I performed in different bands and at the same time collecting my own compositions for a future project.

– What is the name of genre in which you perform songs?

– We are not hostages to style. We like any music that has interesting melodies and harmonies. Anyway we describe the genre in which we play as Symphonic/Landscape metal.

– You have a second album on the way, correctly?

– Yes. The release of the first album “Trailblazer” took place in February 2018. We plan to release the second album in 2021.

– What does await listeners in the new album?

– It depends on what they expect to hear. It’s hard for me to estimate how the album will turn out. But definitely – bright. I think it’s more positive and energetic if compare to “Trailblazer”. But at the same time there will be different moods.

– Who is your group consist of?

– For a typical rock-band we have a classic line-up: keyboardist (me), bass-guitarist Evgeniy, guitarist Nickolai, vocalist Anastasia and drummer Artem.

– How did you move towards creating a band? As far as I know, you have been making music since childhood, graduated from a music school as a pianist, sang all the time and dreamed of connecting your life with music.

– At the age of seven I started playing the piano and at fourteen I already tried to put together the first band. My music school teacher offered me to continue my education in a college. However, in my opinion, in our country an ordinary musician has few prospects: teaching or working in cover band. None of them suited me. After graduation I continued to study with my piano teacher for another years and took lessons in playing acoustic guitar. Later I entered BSEU (Belarus State Economic University) and moved to Minsk where Alcyona was born.

– How do you promote yourself?

In 2017 we signed a contract with Pride & Joy Music for the first album promotion. We constantly communicate with various organizers of festivals and concerts.

– Where do you perform?

– While in Belarus. We visited Moscow with presentation of “Trailblazer” . The pandemic has adjusted plans of all musicians. So in the future, as soon as it becomes possible, we are going to visit other cities and countries.

– What difficulties does Alcyona usually face when growthing? Where to get the strength?

– When a musician leaves the band it is a great difficulty, you have to take two steps back. There are a lot of issues: from how to get to the concert to organizing the shooting of new clip.

But we are driven by a great desire to write and create. This is where strength comes from when something goes wrong.

– What plans and dreams does Alcyona have for the coming years?

– While we are preparing for the release of the second album. We have a lot of activities associated with this: recording and mixing the album, a photo session, clips, new costumes, promoting new material, preparing a concert program in support of the brand new album. Therefore we hope that 2021 will give us the opportunity to realize all this. Until then worky, worky and do not lose heart!

– What advice would you give to those who want to create their own band?

– The first is to be very eager to do it! I think that creating a band and creativity in general should be treated like raising a child – constantly taking care of it development and understanding that this is a project for many years and with this you will have to learn to live.

Author of the text: Victoria Homza