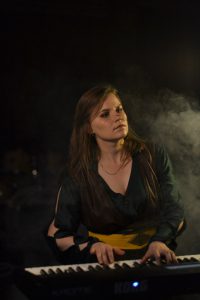 ALCYONA started in the year of 2012 and at the time consisted of only two musicians, Natalia Shatova (keyboards) and Evgeniy Malei (bass), from Minsk, Belarus. The group is the brainchild of Natalia Shatova who also is the lyricist and main composer in the band. Natalia first got in touch with Metal music while studying at a music school with the intention to write both lyrical songs with simple melodies and delightful arrangements for different instruments, which is tailor made for Metal music. In November 2012, Evgeniy Malei, the second composer, bass guitarist and second vocalist, joined ALCYONA and brought the light, bright colors into the songs and the music became alive. Olga Terentyeva joined the duo in April 2016 as lead vocalist. The line-up finally was completed in August 2017 by drummer Anatoly Afanasenok and the Evgeniy’s close friend Nikolai Sidorevich on guitars. 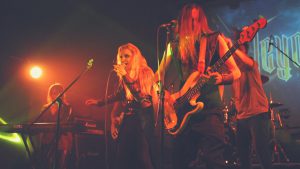 The first album release is now ready and called “Trailblazer”. All songs were composed by Natalia Shatova except for “The Kings of Show”, “DreamRoad” and “Моя Весна” which were written by Evgeniy Malei. Natalia wrote all lyrics together with Zhanna Chernetskaya. “Trailblazer” was produced by Evgeniy Malei & Natalia Shatova and recorded at ALCYONA Records, Minsk (Belarus) between April 2016 – February 2017, and mixed & mastered in Georgia by Max Forneus in May 2017. Artwork and layout were designed by Artem Artyakov & Anna Avaeva. The music video & single for the track “Еnchantment” which was directed by Vlad Skripchenko & Anton Baidyonok will be released in advance in December 1st, 2017. 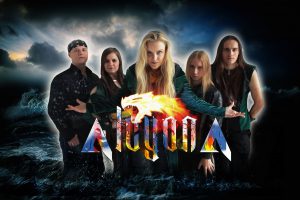